Molgas carried out the commercial, safety and technical operation, from LNG purchase, transport to supply. The company supplied two trailers, amounting to 40 tons of LNG via a truck-to-ship method to the 110m long LNG-fueled cement carrier, Ireland in a five-hour long operation. The operation was coordinated with the Port Authority of Santander.

Molgas has already bunkered the vessel before in the port of Bilbao. Ireland is a cement tanker built by the Dutch shipbuilder Ferus Smit for JT cement, a joint venture between Erik Thun and KG Jebsen Cement from Norway. According to Ferus Smit, Ireland and its sister vessel Greenland are the first ever dry cargo vessels with an LNG fuelled propulsion system and LNG tanks integrated inside the hull. 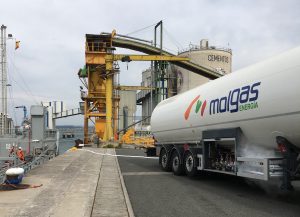